The Pan-African Council of Local Governments

The Pan-African Council of Local Governments held its annual meeting in the afternoon of 01 October 2013 at Sofitel Hotel (Chapiteau ) in Rabat, Morocco, under the chairmanship of Mr. Khalifa Sall , President of UCLG Africa.

This meeting was attended by delegates representing members of National Associations of Local Governments, African cities and several other guests.

After the opening address by the President of UCLG Africa; the Mayor of Rabat, President of the Organizing Committee of the World Congress of UCLG took the floor to thank all African elected officials for their massive presence in Rabat, an African soil. He also recalled the support of the same Council, at its meeting in Cairo in November 2010, for the candidacy of Rabat to host the Congress.

After these introductory remarks, the President of UCLG Africa opened officially the proceedings whose highlights are as follows :

A paper on the Draft Constitution of the High Council of Local Authorities of the African Union (A presentation by the President of UCLG Africa, in the absence of the Senegalese Minister of Local Governments);

A paper on the Draft African Charter on the Values and Principles of Decentralization, Local Governance and Local Development (A presentation by the Secretary General of UCLG Africa);

A paper on the launching of the report on the evaluation of the conducive environment for the action of cities, whose launching ceremony was scheduled to take place on Thursday 03 October 2013 at the UCLG Africa Stand, Institutional Pavilion, Rabat 2013 Exhibition (Paper presented by the LEDNA  Coordinator, Mr. YATTA);

A presentation on the Africa strategy of Cities Alliance (Presentation by Mr. Serge ALLOU);

An update on the 2014 Report on the State of African Cities (Paper presented by Malene LAROS, ICLEI AFRIC);

An update on the Habitat III Agenda (Paper presented by Mr. Alioune Badiane of UN-Habitat);

A presentation on the prospects opened by the Commission of the European Union on the local authorities (Mr. ANGELO BAGLIO);

Presentation of Facility Next Cities of Microsoft (Microsoft Vice-President for Africa and the Middle East);

A report on the African participation in the UCLG Congress, with the presentation of the proceedings of the Congress and the nomination of candidates of Africa for the bodies of UCLG (Presentation by the Secretary General of UCLG Africa).

After the presentation of these papers and in the absence of any other issues, the President ordered the adjournment of the session. 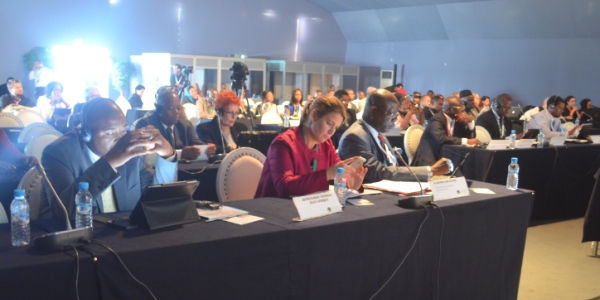