The International Forum in Lleida took place on the 28th and 29th of June and was the setting for Mayors, practitioners, experts, development partners and network representatives to come together and discuss the priorities for intermediary cities.

The Forum was a joint effort by the city of Lleida - the host, the UCLG committee of Urban Strategic Planning and the network of Intermediary cities – CIMES – along with collaborating partners UN Habitat, the International Labour Organization, Cities Alliance and FMDV. The Forum brought together Mayors from countries around the world including Morocco, Bangladesh, Ecuador, South Africa, Mozambique, Philippines in addition to political representatives from Italy and Spain and practitioners and network representatives from Argentina, Brazil, Netherlands, South Africa, Turkey, Israel and Egypt, amongst others.

Further to the roundtable debates and discussion sessions, the agenda of the Forum also included site visits during which the city of Lleida demonstrated its development strategies with particular focuss on agricultural and economic development and its relation with the hinterland.

A Mayor´s roundtable, moderated by the Secretary General of UCLG, Mr. Josep Roig, was the opening event of the Forum and gave Mayors the opportunity to briefly present their cities and debate questions related of local economic development, spatial and environment planning, institutional and governance issues as well as social dialogue and inclusion in relation to their cities.

The following day, a brief explanation of the work conducted on intermediary cities was presented by Ms. Jacquie Subban, representative from Durban/eThekwini and the Municipal Institute for Learning (MILE) Chair of the Committee of Urban Strategic Planning. Researchers also had the opportunity to present their work on intermediary cities during a roundtable debate moderated by Ms. Laura Petrella of UNHabitat. Prof. Josep Maria Llop and Ms. Sara Hoeflich briefly presented the Framework Document they are jointly developing on recommendations for the development and recognition of intermediary cities that will be presented at the UCLG World Summit of Local and Regional Leaders that will be celebrated in Rabat in October 2013.

The participants were later divided into thematic groups facilitated by the partners to discuss the guidelines and recommendations to be included in the document, giving city representatives the opportunity to prioritize their positions and express their concerns.

The Forum closed with a debate between partners on the best course of action for the agenda of intermediary cities and the next steps in terms of the roles and capacities of the actors involved. Much of the interest demonstrated by participants attending the Forum was to further engage in upcoming activities and initiatives following on from this event.

A documentary and audio visual material (photos and videos) gathering the most relevant moments and outputs of the Forum will be shared shortly.

We would like to thank ALL attendees for their participation and involvement in the Forum and will inform briefly on the continuation of the work initiated with your support and contribution. 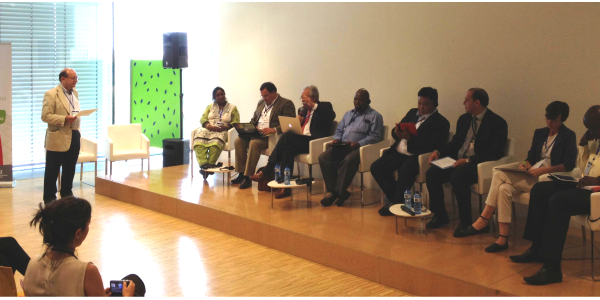