Source: www.delog.org
During the 4th UCLG World Summit, which took place at the beginning of October in Rabat/ Morocco, DeLoG hosted a parallel session on Developmental Local Governance and the Post-2015 Development Agenda. With approximately 70 participants the session was well attended.
The session kicked off with introductory remarks by Josep Roig, Secretary General of UCLG. On behalf of the Global Task Force, he gave an introduction to the Post-2015 process.
This introduction was complemented by a presentation by Paula Ravanelli Losada, special advisor to the Undersecretariat for Federative Affairs of the Presidency of Brazil. She presented Brazil’s initiative to monitor MDG achievements in a disaggregated manner as well as incentives related to this approach. To support their municipalities in achieving MDGs, the Brazilian central government developed indicators for the municipal level that are adapted to the skills and capacity of local governments. It is then up to the territorial entities to decide which of these fields they wish to focus on, which is linked to additional support from the national level.
Although participation in the program is voluntary and development priorities are self-selected, they are binding in retrospect for the respective governments. Statistics on the achievement of objectives are available online on a user-friendly interface. In
addition, prizes are awarded to the best performers as incentive for municipal governments to aim high.
Following this presentation, representatives of DeloG member organizations, government and civil society engaged in a panel discussion on the session topic. The panel was moderated by Alioune Badiane (Director of Projects, UN-HABITAT) and Jochen Mattern (Coordinator, DeLoG Secretariat).
The panelists were
- Mr. Antonio Vigilante, UN Resident Representative, Europe
- Mr. Marc Trouyet, Head of department for democratic governance, MAE, France
- Mr. Akwasi Opongfosu , Minister for Decentralisation , Ghana
- Mr. Joel Bolnick , Manager of Shack / Slum Dwellers International (SDI).
The following is a short summary of the main points of discussion:
Tags:
Rabat 2013
World Summit of local and regional leaders 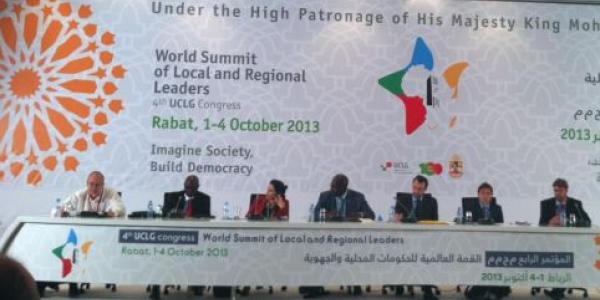