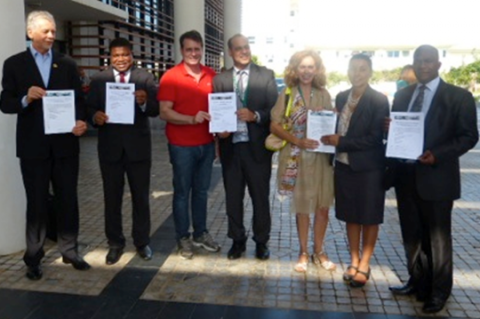 The first Walking Audit in Africa took place on the past 1st of October as one of the side events of the UCLG World Congress in Rabat. Morocco is a country with a strong walking tradition as a way to move in the traditional “medinas”. For instance, the medina in Fes is considered by many as the largest pedestrian “labyrinth” in the world.

In the city of Rabat, two thirds of the population uses walking as their primary mode of transport, revealing the importance of advocating for policies that acknowledge and promote it as one of the key transport modes in cities. Whilst many cities have promoted walking programs, much more can be done to ensure these programs are provided for in a healthy and safe environment.

The Walking Audit: The Audit was organized by the UCLG Committees of Urban Strategic Planning and Digital and Knowledge based cities, the city or Rabat planning department, the international NGO Walk 21. This unique experiential learning exercise was an eye-opener for all those that participated, and it helped creating a better understanding of the city from a pedestrian´s perspective.

The alignment of public transport and walking is strategic. The walking audit revealed that there has been significant programs to promote public transport in the City of Rabat such as investment in the public tramway -172,000 travels per day with a network that will expand up to 400 km in the next 10 years. The Mayor of Durban congratulated the city for this effort, reminding other African cities for the need to mitigate income gaps, reduce car dependency and create viable alternatives to reach destinations timeously as African cities are increasingly affected by traffic jams and pollution.

8 city leaders signed the charter: Councillor Samira Achour from Rabat joined the Mayors: Jose Fortunati of Porto Alegre, vice mayor Ibone Bengoetxea of Bilbao, James Nxumalo of Durban, leaders of the UCLG committees, as well as Mayors Benedito Guimino of Inhambane, Mozambique and Luciano Rezende from Vitoria Brazil and Mohammed Sefiani, from Chefchaouen, Morroco to sign the charter promoted by Walk 21 to create a culture and community where people choose to walk (see picture).

The need to increase awareness was revealed reminding walking as a policy of rights and access for all. Improvements seem more an issue of priority than costs, as walking access is ensured when infrastructure is provided.

The charter on walking is a commitment to holistic and inclusive mobility, which is enhanced by well-designed public spaces for people, improved (multi modal) integration of mobility networks, supported spatial planning tools, reduced risks and fears from danger and crime. See  http://www.walk21.com/charter/

The Rabat walking audit was a milestone, as it was the first time in history that the Walking agenda and charter was brought to and signed by African cities. The Mayor of Durban, Mr. James Nxumalo and the ex-Mayor of Stuttgart, Dr Wolfgang Schuster promoted the charter to be signed by all UCLG members in the UCLG Executive Bureau.